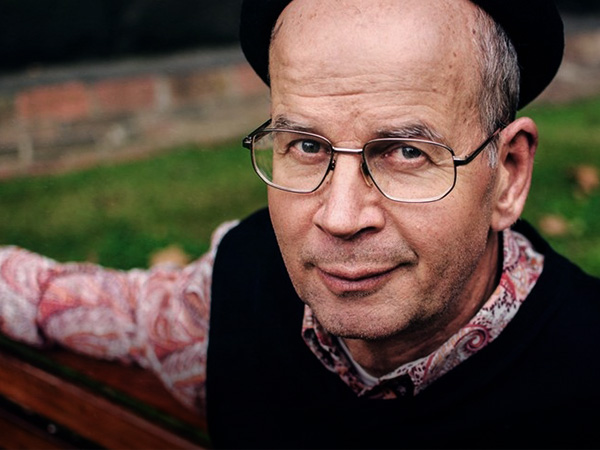 When people ask what I do for a living I say, “Well, I’m an actor and I write a bit.” The standard reply is, “Oh, I thought you might be an actor.” When I ask how they arrived at that conclusion most often they say, “You look like one.” Now, I’m always a little alarmed by that. What does an actor look like? Because when I stand in front of the mirror I don’t see an actor. I certainly don’t think I try to look like an actor. I don’t wear a feather in my hat, in fact I don’t wear a hat and I definitely haven’t had any work done. I wear Levi’s not Armani, I’m pretty sure I don’t have a penetrating stare and my eyes aren’t moon shaped pools of ocean blue. To me, I just look like the next 56 year old, slightly more dog eared than most but with a little more hair.

So when the Melbourne poet Peter Bakowski opened his door to me for the first time I got something of a shock when I thought to myself, “My God. He looks like a poet.” And yet somehow, he did. On that particular day Peter was dressed in orange jeans, a hand knitted jumper and his head was topped with a black beret. Yep. A poet. A Beat Generation one at that. But as I sat in his kitchen listening to him speak about his life and his work I realised that it wasn’t the outfit. It was him.

From the moment we sat I felt drawn in by what I can only describe as an uncommon openness, a startling willingness to speak from the heart to a total stranger which was neither confronting nor forced. And he has a profoundly deep and thoughtful way of answering questions that is frankly, poetic. Nothing is blurted out, the answers take time as if he’s drawing them up from the depths of himself and when they do arrive, they come with a beguiling sense of grace and care, as if the words were chosen in that moment just for me, spoken simply and directly, as he himself wrote in one of his poems, the way a hammer talks to a nail.

And as he talked seated on either side of his kitchen table I found myself transfixed by his body. Hands which are often contorted as if cramped by the effort of clearly, viscerally illustrating what he’s saying. The pressing forward in the chair which makes him seem at times like he is willing himself on in the struggle of life. And his eyes that close tightly as he searches within himself for the right words and the right tone.

It seems, to me at least, that Bakowski’s life is somehow perched on a knife edge, that he has willingly and yet uncomfortably accepted that the humorous, often painful vagaries of life are his greatest muse. Vagaries that are not just his but everyone else’s.

Peter was a late starter and didn’t begin writing until he was 27, his first poem written while travelling in Texas not long after having fallen madly in love. “She was a St Kilda girl and I’d already bought a ticket. I asked if I should cancel and she said “No, no. You go”.”

He was staying with a friend who he’d met through a common interest in music and after just 2 weeks he received a Dear John letter. Devastated he instinctively put pen to paper to make sense of his feelings. Almost unconsciously a poem emerged.

“I was relieved in a way. I’d been looking for a means of expressing myself. I tried a lot of things including the saxophone for a while but I noticed I wasn’t practicing and realised I was kidding myself so I sold the sax back to the teacher. But the first time I think I managed to say something from the heart was in that poem.”
There’d always been a love of words and books. As a child he read voraciously. Comics, detective novels, the Man from Uncle spy thrillers, nourishing himself with characters and plots and adventures. It was as a child too that he fell in love with the map of the world. Enthralled by the colours and shapes, he knew every capital city by the age of eight.

“So I decided to travel and have my own adventures and the people I met became the plot, they gave me the poems.”

Travel he did for 7 years, propelled by the “white heat of creativity” as he calls it. Having left Australia in love, he moved through America in search of solitude. He drifted through Europe and Middle East until he finally arrived in London where he spent 5 years. And as his “youthful zeal” became exhausted he spent much of that time feeling “suicidally lonely,”

“I’m personally very aware of the huge difference between solitude and loneliness and my own nickname for myself at some stages in my travels used to be ‘God’s Loneliest Man’.”

My loneliness in some of these rooms frightened me.
I found myself sleeping 14 to 16 hours a day.
Sleep was my remedy
and it was no remedy at all. – In rooms with my mentors

He calls those years his apprenticeship and he feels it’s an essential part of the process of becoming a writer. “There’s no short cutting the apprenticeship. It’s all about learning. It’s important to believe you are an eternal student.”

After returning to Australia and serving a few more years as an apprentice he bundled up the best of his poems and offered them up as a manuscript. It was a moment that terrified his parents, particularly his mother who never really approved or perhaps understood his choice of career.

“They struggled with the fact that I was a non-conformist. They were always pointing out things like “John’s wearing a nice jumper. Why don’t you get a jumper like John’s.” and they’d say “You’ll never get a girlfriend unless you have a nice car.”

Which is perhaps understandable given that both his parents were post war refugees, his father Polish his mother German. In the early 60’s they were loaned money by a woman who was neighbour and opened a European delicatessen in Kew. A business that thrived and allowed them to build the secure life which the war had robbed them both of as children.

“When I quit my first job they were very disapproving. It was out of fear. Fear of another way to live and think. What will the neighbours say sort of thing. But they grew up as displaced people so security, ownership was something they understood.”

His parents eventually separated, a messy divorce that profoundly affected him and still seems to somehow be present in him several decades later. It’s part of living on that knife edge, to feel deeply comes with a price and that price is the pain often comes with it. It’s events like his parents’ divorce, his own heart surgery or a man crying alone on a park bench that provide a great deal of the raw material for his work. For Bakowski, these are the types of things that bind us, the individual experiences that resonate with us all and are the basis of our humanity.

What removes our masks is loss.
You can take the phone off the hook,
but not your heart. – Blue condition

“I’m interested in the idea of turning a readers’ attention to the individual. Some nights I walk past the high rise flats in Richmond and there will be lights on. And I think ‘each one of those lights is a person. Each one has had things happen to them. Some good, some bad.’ Our society and even history forgets that. We read about 10,000 people dying and it’s offered up as a statistic and I go ‘Hang on. That’s 10,000 individuals, each with a set of parents, each with perhaps children and a connection to a village or a city. Let’s not forget what these individuals achieved, who they were, what they felt.”

And it is through poetry that Bakowski celebrates that individuality. Getting in to the headspace of another human being, using his imagination to create worlds in the lit windows of flats, using his own feelings to express the universality of human feelings. Universal loss, universal loneliness, universal joy. And he leaves the interpretation of his poems in the hands of those he writes about.

“I don’t think poetry needs explanation. You can detail the genesis or help out with the symbolism but interpretation is up to the individual and they will make of it what they will.”

An underscore
is a hyphen
that’s depressed – Punctuation Blues

The important thing for Bakowski is that it connects. That he creates a world that entices you to enter, be it a room, a headland or the mind of a person. A credible world that engenders empathy. An image or a story that speaks.

“I think the very best that literature can provide is solace. I remember being lonely in London … finding myself in bed at 2am reading Jack London and agreeing with him out loud, yes yes I’ve felt like that! When that happens to me, suddenly I don’t feel quite so lonely”.

Most days Peter walks from his house in Richmond to the City Library to write. Often it just doesn’t “happen”, and he walks home without a poem, but never empty handed. “There’s a guy that sleeps in a chair at the city library. He became the inspiration for a poem. And park benches. Park benches feature in a lot of my poems”.

Now in his 60’s he continues to be driven by a moral responsibility to understand and contribute to our understanding and as I left his house he offered me a simple anecdote that rather sums up his quest. It’s an old Native American saying that simply goes. “To understand we must walk two moons in the moccasins of another.” And on any given day, Peter Bakowski is doing just that.

Below you can find links to further reading in reference to the interview.